This National Geographic Magazine map of the area between the North Pole and 60°N latitude is replete with the latest information about the Arctic and explorations of the Arctic. The routes of explorers from various countries, differentiated by color, are identified, along with telegraph lines, railroads, steamship routes, and winter harbors. Detailed insets of Spitzbergen, Franz Joseph Land, and the Smith Sound Region are included at the corners of the sheet. The abundance of details and beautiful colors makes this one of the more striking maps of the North Pole regions. This striking map of the Arctic regions appeared in the November 1925 issue of National Geographic Magazine, accompanying an article titled, “The MacMillan Arctic Expedition Returns.” This article introduced the world to Richard E. Byrd, the man who would soon be the most famous aviator-explorer of the time. Filled with detailed routes of explorers, this is a fitting companion to the 1907 map, North Pole Regions.

This map shows the complex bedrock geology and stratigraphy of the Canadian Arctic. As the climate continues to warm and industries seek mining opportunities in the Arctic, the preservation of both the cultural heritage and the environment of this region is of utmost importance to the indigenous peoples of Canada’s northern territories and the Canadian government. 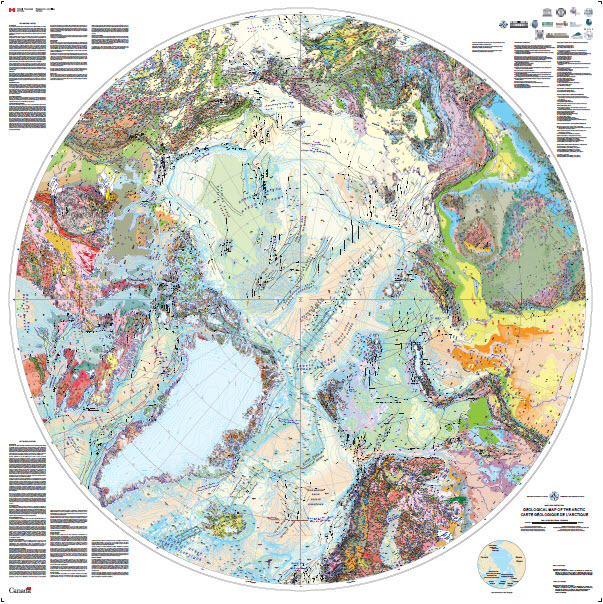 This unusual map of the Northern Hemisphere, based on the work of Jean Palairet, shows an “Icy Great North Sea” surrounding the North Pole and intersected by an imaginary Northwest Passage route from Portugal to Japan. Contrary to custom, Asia is located on the left side of the map with America on the right. Another interesting feature of this map is its portrayal of a massive Sea of the West off the coast of what is now California, reminiscent of the cartography of Buache.

The northern part of North America consists of highly distorted landmasses, including an elongated peninsula roughly placed at Alaska’s location. Some small islands representing the Aleutians are scattered beneath the peninsula, which bears a note reporting their discovery in 1753. Another note identifies the point at 80°N reached by a Dutch ship in 1670. The effects of climate change, notably the melting of ice around the North Pole, creates new opportunities for international transportation networks. Assuming the trend continues, parts of the Arctic will become increasingly navigable for longer periods of time during the year, particularly during summer months. The main trans-Arctic routes include:

Dr. Jean-Paul Rodrigue of Hofstra University gives three reasons why the commercial utilization of Arctic routes is still a speculative endeavor. In his words:

Still, shipping companies are considering how to use the Arctic as a shortcut between major markets of the northern hemisphere. Some calculations show that Arctic routes could cut off ten to fifteen days of travel.

Produced by the Canadian government in 2004, this is the most current nautical chart available in print for the Northwest Passage. The map details the precise route throught the passage, marking the depths along the way. Examining this map provides a sense of just how difficult it would have been to successfully traverse the Northwest Passage without a correct chart. “The map illustrates the complexity surrounding the future of the Arctic Ocean area in respect of access to resources based on the Arctic Council Arctic Marine Shipping Assessment 2009 Report. This report emphasizes that the regions where there are currently high concentrations of Arctic marine activity include the North Atlantic Ocean, the Barents Sea, and along the coasts of northwest Russia. The increase in cruise ship activity [creates] an increased level of risk of accident as many of these ships are not built for Arctic waters. In addition it is argued that the conducting of more research activities in the central part of the Arctic Ocean may also constitute a risk. The major concern, however, [is] what is going to happen in the coming decades as the sea ice retreats, opening the way for a significant potential increase in maritime activity. The map shows where these new activities are expected to take place and the sea routes that may become important in relation to these future activities in the region.” (Megatrends, p. 84)