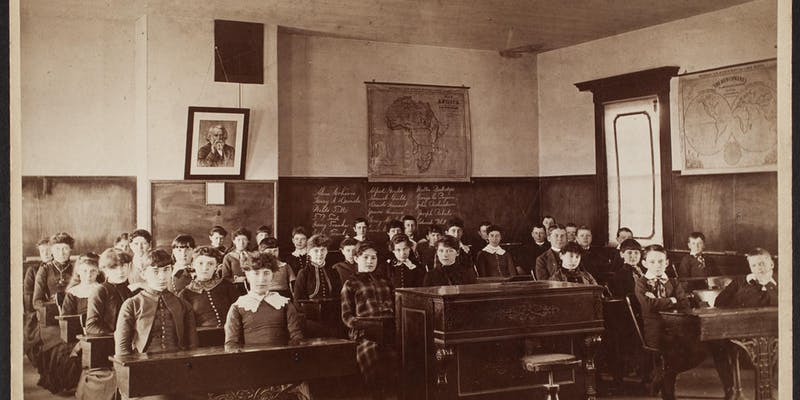 S. Augustus Mitchell and Case Mather
No. 6. Mitchell’s Series of Outline Maps for the Use of Academies and Schools [New Hampshire and Vermont], 1844
Osher Map Library Sheet Map Collection
https://oshermaps.org/map/53722 Samuel Augustus Mitchell (1792-1868), the well-known American geographer, began his career as a school teacher in Connecticut. Frustrated by the lack of maps and atlases available to teachers, he founded a successful publishing business in the 1830s to supply the very classroom aids he felt were lacking in schools around the country. Mitchell’s Series of Outline Maps for the Use of Academies and Schools were created as teaching aids in 1841. The full series consists of thirty large sheets (with twenty-four distinct maps), two of which are on display here.

Mitchell felt that his outline maps would “be to the study of geography what the exercise on the blackboard is, to the science of numbers,” and that “knowledge communicated to the mind through vision, produces the most vivid and lasting impression.” Mitchell hoped the maps would be used in schools and academies for recitations, and, as such, prepared a small book for teachers (a “Key,” which you can see in the case below the maps) with the towns, cities, islands, rivers, lakes, and mountains, etc. labeled alongside their corresponding letters and numbers found on the map. All maps had a common explanation of characters found throughout the series. He also included a series of questions and responses for each map, which could be memorized and recited by rote, a common way of learning in this era.

Mitchell argued that even very young children would find the “map pictures” attractive, and that their consistent display in the classroom would increase familiarity with geography and landforms. These well-worn outline map examples exemplify the popularity of Mitchell’s pedagogy. If you look closely at the large photograph of the Medfield, Massachusetts, schoolroom at the beginning of the exhibition, you can see two maps from Mitchell’s large classroom wall map series hung on the walls (Africa and The Hemispheres). Grover’s Blackboard Outline Map of the United States is stenciled and painted on canvas and was designed to hang in front of a classroom blackboard and to be written on with chalk. While not much is known about this particular example, other than the fact it was produced in Syracuse, New York, in 1900, blackboard outline maps were frequently marketed to teachers in supply catalogues and magazines throughout the first decades of the twentieth century by companies like Hammett and Rand, McNally & Co.

In the 1920 annual report of the Superintendent of Boston Public Schools, the revised sixth grade syllabus called for a move away from common nineteenth century practices like rote memorization and the recitation of “long lists of cities, capes, bays, etc.” The new curriculum stated:

There is a very definite place for fact geography, but we must remember that the lesson on geography is to teach the child to think as well as to master facts. No teacher can be expected to teach this Grade 6 Geography (and History) Course well unless she has ready access to a reasonable number of wall maps, blackboard outline maps, and individual maps for her class. The smallest number of maps from which any Grade 6 teacher could be expected to teach is as follows: Political Maps of the World, Europe, Asia, and Africa; a blackboard outline map of the world.

Blackboard outline maps were extremely useful and versatile classroom tools that were considered essential and could be re-used for many years. As an Ohio teacher noted in The Ohio History Teacher’s Journal in 1916, “All of our history teachers have found these blackboard maps very useful in teaching geography.”